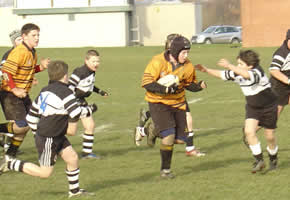 On Sunday 25th September the u 12`s had their first blitz of the new season. Hosted by Ballina / Killaloe the blitz took place on the new training field near Clarisford. Despite heavy rain the night before and during the day the pitch held up very well and great credit is due to Joe Gilmartin for the work he has done in preparing the pitches and car parking.

We were up against teams from Abbeyfeale, Newport and UL Bohemians. We played a strong Abbeyfeale team in the first match and despite being behind for long periods of the match we won 4 tries to 3. It was a very physical game and we were delighted to come away with a win. In our second match we played Newport. This turned out to be an easier match and despite Newport’s best efforts we were too strong and won 6 tries to 1. Our last match was a very exciting affair against a strong UL Bohs team. We managed to win this match by 2 tries to 1 with our tries coming from George Keely and Cian O’Donnell. Well done to all the players and especially Paul, Dylan and Rowan who taking part in their first blitz. Let’s hope this is a good omen for the rest of the season.