On Sunday, December 9th our U13`s played Thomond in a top of the table clash of two unbeaten teams.

An early Thomond try was cancelled out by a Hugh Denning touchdown and the same player crossed again before Thomond replied just on the stroke of half time to leave us 14-12 in front at the break.

The second half was very tense and with about 5 minutes left Thomond scored again to lead 17-14, but with time almost up Hugh Denning once more got the ball in his own half and evaded all attempts to tackle him and scored his third try under the posts which we converted to leave the final score: Ballina-Killaloe 21 Thomond 17.

Man of the match for the second game running was Oisin Cooke, with hat trick try scorer Hugh Denning a close runner up. Special mention must go to Darren Bowe who converted all three tries which was the difference on the score board.

Well done to the whole squad on a magnificent effort. 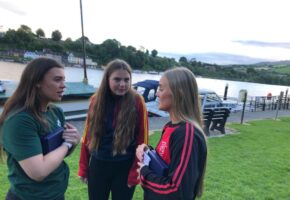 Ballina Killaloe RFC was proud to recognize the fantastic achievements our underage players and squads gained this season past. U13 Boys, League and Cup Finalists U14/16 Girls Shield and Plate finalists U18 Girls League Champions and Plate Winners We were delight to acknowledge the brilliant achievements of schools and senior players, Ruadhan Quinn, Oisin Pepper, […]